Archello has published the “25 Best Architecture Firms in Sydney” and it’s a great thrill and privilege for my practice to have been selected for inclusion amongst a stellar group of architecture practices producing great work in Sydney.

Many thanks to the editorial team and writer at Archello for the recognition. 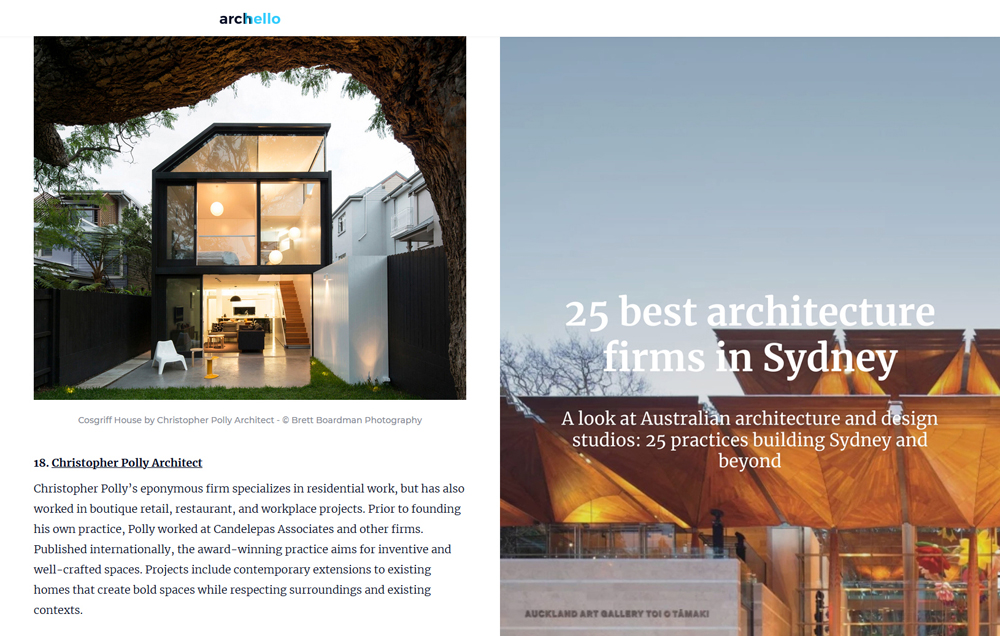 Sketch design concepts have been prepared for a new off-grid house in the Blue Mountains region west of Sydney. Based on an efficient 4m x 3.8m structural grid, the design option pin-wheels a series private and public rooms around a central courtyard to provide a modest internal floor area of 100 sqm with a low environmental footprint of only 129 sqm on the site.

It enables strong connections to its surrounding landscape and vast views of the escarpment and mountains beyond, while also allowing its entire envelope to be fully shut down when unoccupied. A robust low maintenance palette of fibrecement cladding, galvanised metal panels, concrete and zincalume roofing provide long term durability and make reference to the various grey and silver tones of the eucalypt and angophora trees on site. 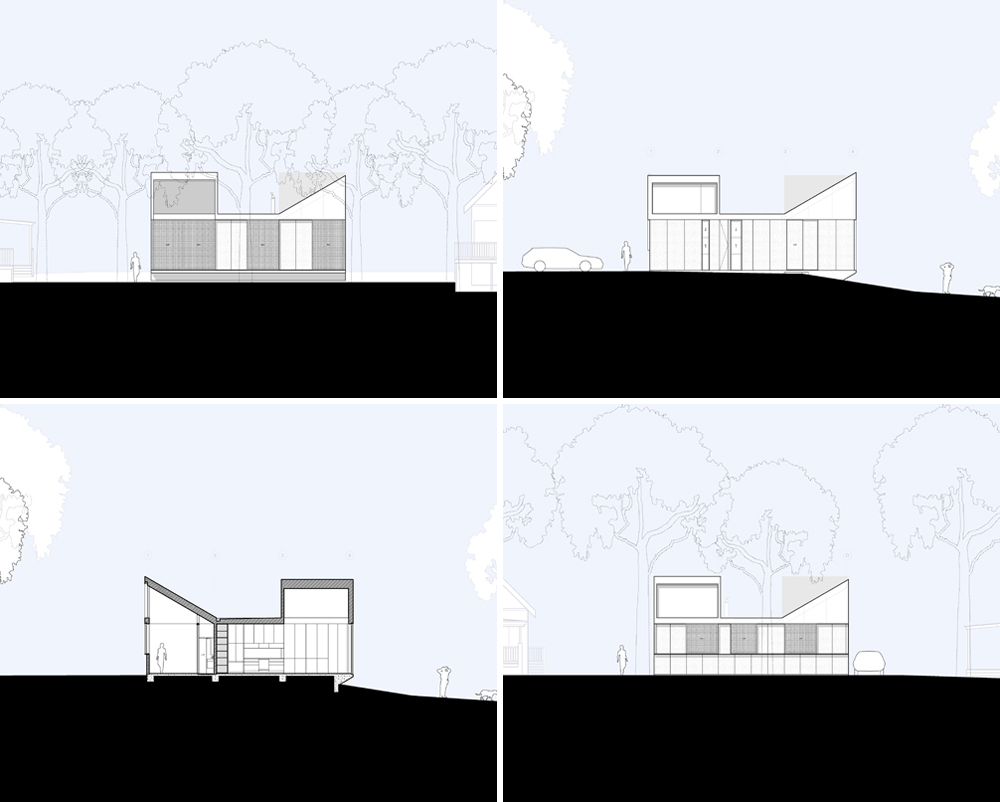 Sketch design concepts were recently prepared for new work and adjustments to the interior and exterior at Darling Point Penthouse, inclusive of new built-in bench seating in stacked and patterned brickwork at one of the terrace.

It’s a rare and lovely opportunity to continue working with a stellar client and to be able to re-visit a built design with a view to further enriching their much cherished home. 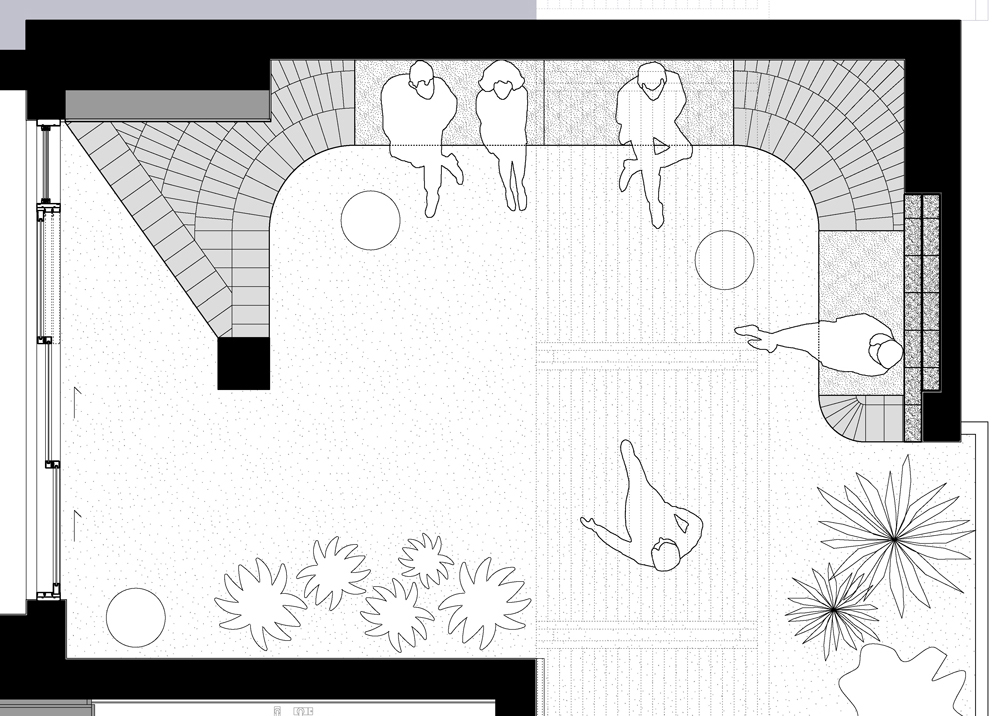 Visualisations of National House have been uploaded in ‘Projects’. The design makes geometric and elemental references to neighbouring houses of its immediate context while also alluding to the formal qualities of various compact housing types in Japanese, Dutch and Belgian inner urban neighbourhoods.

Its exterior is predominantly articulated by a ‘jacket’ of charred timber cladding, black aluminium glazed doors & windows, black metal hoods, and black standing seam metal roofing for a restrained and singular external expression in counterpoint to its neighbours. Internally, a composition of certified ash timber walls and joinery, black steel, terracotta, and burnished concrete create a series of warm and pared-back spaces.

Sketch design concepts have been prepared for new work at Cosgriff House, inclusive of this design option in its two principal elevations.

A periscopic addition over the original fabric makes an appropriate homage to the established geometries of the original roof form while also referencing particular edge details of the previously designed rear addition – for an ongoing design dialogue that enables new activation to the street frontage and strengthened connections to the large jacaranda and sky & district views to the rear.

Visualisations of Greenwich House have been uploaded in ‘Projects’. The proposal provides crafted inter-penetrations of space and light across its multiple half-levels, and offers a multi-generational model in its spatial organisation to enable room for a growing family with permanent accommodation for the owner’s parents.

Its formal geometry is expressed as two distinct volumes separated by an open courtyard along the northern edge, and bridged by a glazed stair circulation zone for access to light, ventilation, and divergent interior views at the centre of the house. An ‘up-ticked’ rear and several considered pop-out projections in the roof and wall planes expand the envelope to allow enhanced connections from various spaces to sky and views.

The new year has kicked off to a good start with Christopher Polly Architect having been voted a winner of the Best of Houzz 2021 awards in Design for the practice’s portfolio of projects. This is on the back of also having been awarded in 2020, so it’s very pleasing to know that the work of the practice continues to be well recognised.

It’s very heartening to learn that Binary House made it into the Daily Telegraph’s Top 50 Homes in NSW at the weekend. Many thanks to editor Robyn Willis and the selection committee for the recognition.

Several sketch design concepts have recently been prepared for a new skinny house in Leichhardt, Sydney - inclusive of this design option shown in its principal elevations to the street and rear. The design option makes geometric and elemental references to particularities of its immediate context while also making allusions to the formal qualities of various compact housing types in Japanese, Dutch and Belgian inner urban neighbourhoods.

In a trifecta of sorts, Cosgriff House recently sold within just 2 weeks into its off market campaign, making it a 3rd project of mine to sell in the last few months. Faithfully maintained by my clients over the last 8 years, and enhanced with appropriate landscape overlays during this time, the result communicates yet again the end-to-end architectural value brought to the project, inside and out. Fingers crossed it’s also well looked after by the new owners.

It’s a very bittersweet time for my Binary House clients following the recent sale of their much cherished house and landscaped gardens to a new owner from Sydney’s inner west in mid-August. It was certainly a labour of love over several years for all involved, so fingers doubly crossed it’s well looked after.

If there is a way of measuring the value an architect brings to a project, then its sale may arguably be a predominant method of communicating this - especially when procuring common-goal quality outcomes without sacrifice of the author during its execution on site. Elliott Ripper House sold in late-May in just under 3 weeks despite restrictions in a covid-19 market, and set the second highest record in Rozelle for a 3-bed house considering its modest size - helped without doubt by my house-proud clients who lovingly maintained it over the years / Photos by Aimee Crouch, courtesy of Bresic Whitney.

Several sketch design concepts have recently been prepared for a new project involving alterations & additions to an existing 1956 suburban dwelling in Matraville, Sydney - inclusive of this sketch design option shown in its two principal elevations.

Very pleased to share that Christopher Polly Architect has been voted a winner of the 2020 Best of Houzz awards in Design for the practice’s portfolio of projects.

The Daily Telegraph Home magazine has featured a “Clean and Simple” snippet on the Binary House bathroom within a larger article entitled “The Next Wave”.

While very grateful to editor Robyn Willis for its inclusion, it’s noted that contrary to the article the bathroom has large openable windows for natural light and ventilation. 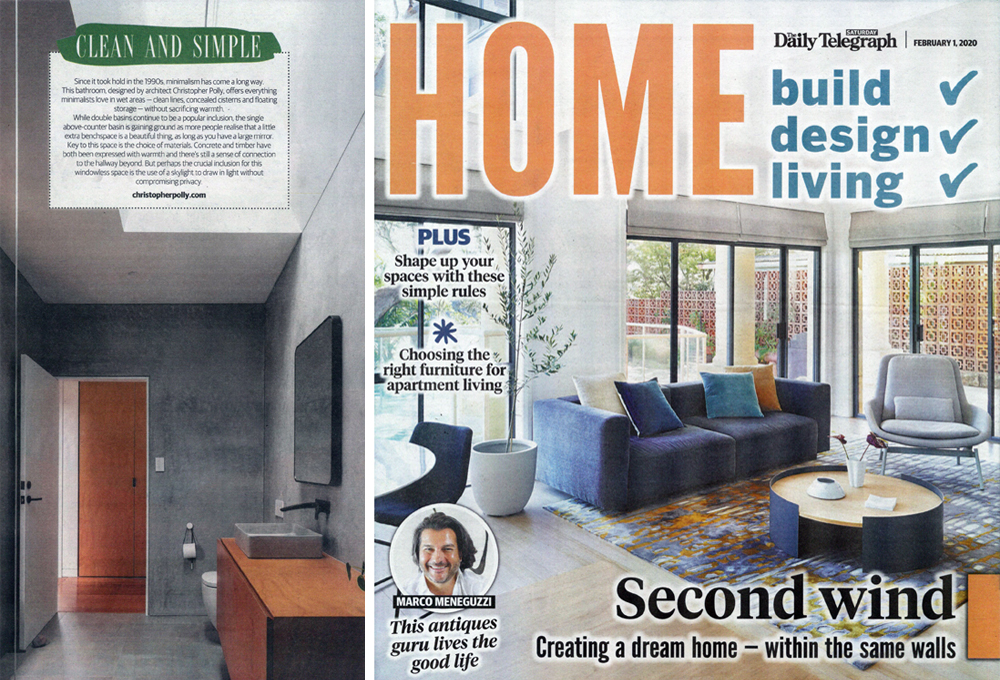